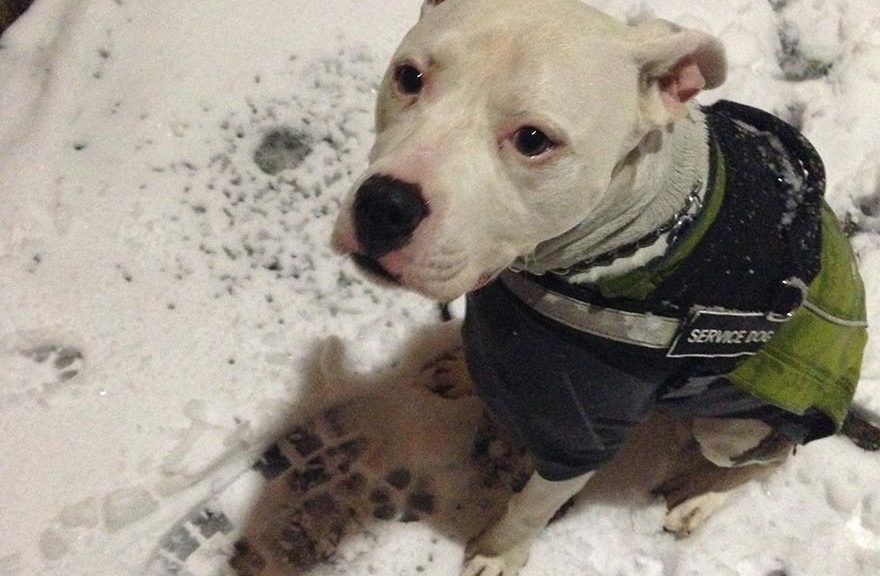 Dear Fergie. Late at night on a snowy night in February 2014, just a few weeks before we left Seattle on our big U.S. road trip, we walked over to Fairmount Park from our home in West Seattle. I had expected the park to be deserted since it was snowing and it was late, but there we met a nice couple and their young white American Bulldog.

I wasn’t sure how you’d be with him at first, because you had already become pretty dog reactive by that point in your life, but after some hackle raising and circling, you decided he was mostly ok. You spent the next thirty minutes barking at him and playing, and I hadn’t seen you that happy in a long time.

You were already nine years old at the time and weren’t as agile as you once were, but you did your best to keep up with the young boy, who was running in circles around you.  I was so happy to see that you made a new boyfriend. You had SO much fun playing with that dog in the snow. This was him.

About Jamie and Fergie

Fergie was the beloved dog of commercial animal photographer Jamie Piper. Jamie pulled Fergie out of a shelter in Seattle in February 2006, and Fergie became Jamie’s constant companion, road trip buddy, the mascot and muse for Jamie’s photography business. The girls lived together in San Diego until Fergie passed in August 2018. This blog is Jamie’s tribute to her precious larger-than-life girl.